Thanks to Professor Teenwolf (design guru and spraff master) and his intense powers of blagging he managed to get me and ratking (coder to the stars and hobo sex act coordinator) into Rezzed!

It was really important for me to go to rezzed this year. Having gone to E3 thanks to life long friend Ian Higton of Platform 32 and Eurogamer fame I knew that an expo for indie games is a place we really as a young game dev team needed to go.

I took a lot from the weekend, and we got to play some wicked games, but we also got to see how accessible the indie game world is. I am under no illusion how much talent, time and sacrifice it takes to be a developer but, we have a chance, if we can stumble on the right ideas we have the nucleus of a team that can make some cool games.

The Dev talks were really cool to watch, the indie scene is really keen to share knowledge and its so so helpful to us hearing about other peoples problems because it helps us to avoid making some mistakes. the indie scene is so supportive and it really is a community that trys to help the little guy succeed. We are proud to be the little brothers of all these talented people. I cant wait until we can contribute to the scene and maybe one day we can show a game at rezzed!

so what games did we enjoy playing? Well for me I loved hotline Miami 2 and also had a blast playing Total war Rome 2. I don't play these types of games but was pleasantly surprised with the game and how much I got into it. I will definitely be getting this game in September when its released! Surgeon simulator was hilarious and we spent ages watching people play it. Its strange but I probably spent more time laughing at people playing than actually playing myself!

Pj Had a go on the oculus rift and he couldn't stop going on about it! honestly if you can get a go on a dev unit then go for it, its going to change gaming! 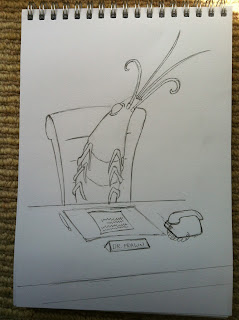 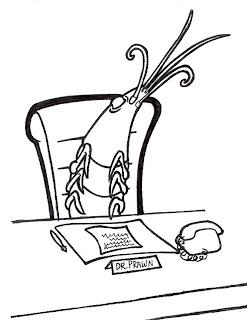 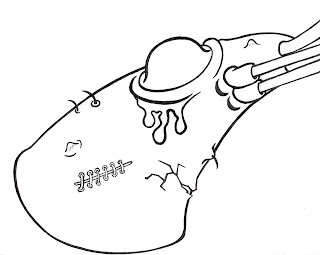 This is the evolution of Dr. Prawn, before I set up my scanner I took snaps of my drawings so that I could ink them in Photoshop and illustrator

So what have I learnt?

So then, what the hell have i been doing all this time?

A fucking shit load that's what!

Most of my time has been taken with learning Adobe Illustrator. I know Photoshop pretty well but I really wanted a sharp, modern look to my art work. Photoshop art done right is stunning but I find it difficult to get crisp artwork our of it and I cant get the best out of the software. I chose to work in Illustrator because we decided that flash was the best way to go to learn game design and the 2 programs work well with each other.

The surprise pay off from choosing Illustrator to work in was that I work best when creating from scratch by hand and the live trace function in illustrator meant that I can do this easily and quickly. First of all I would draw characters by hand in pencil then I scanned the sketch into illustrator and I traced over the image to get an out line. I found that this took a while and wasn't as good as I felt I could do, so I focused on my hand drawn art work.

After sketching out a character I first of all used a black out line pen, then I'd draw a stylised out line to the image - A lot of you tube videos recommended that I 'inked' the sketch by tracing over it using a wacom, but wacoms cost bucks and I'm skint so I had to find another way. I found that I could 'ink' the image with a fine line pen and then scan that into Photoshop to tidy up and do some contrast adjustments before doing a live trace in Illustrator.

I'll have to change the way I draw and build images in illustrator to be able to animate in flash as the technique I mention above means that you cant isolate limbs and objects to animate in flash. its no biggy but one of the pitfalls of not being tutored is there's no one that can steer me back on track when I take a wrong turn. its all part of the learning process but annoyingly avoidable.

Anyway, next up is the web site, I'm looking forward to this as I can play with my new skills and it feels good as an artist to be able to do what I want! Art is my little corner of the project and although art is no where near as important to games as game play and mechanics I get a kick out of beautiful games. Limbo is a bench mark for me. Its stunning looking first and foremost but its more than that. The look and atmosphere of the game really strikes a chord with me and I hope to make someone "feel emotion" (yeah, I know how gay it sounds) while playing one of my games one day.

Ok, im going to go drink beer and fart man guffs onto ducks heads. Till next time douche bag...go thumb your own arsehole.
Posted by Tito Mungy at 13:54 No comments:

This is my blog charting my rise from Photoshop hobbyist to game designer/artist extraordinaire.

So lets start from the start (obvious I know but its Monday and my brain is fried from a busy morning). I've always been interested in Art and have been drawing from an early age.

The earliest memories I have of my interest in art is spending hour upon hours filling drawing pads with random cartoon characters. I didn't really have an interest in cartoons or comics (apart from the beano), so why the hell I did this I don't know.

Probably my greatest love (as well as star wars and transformers) was my 48K speccy. This is the reason I am a gaming geek. I loved my speccy and ploughed thousands of hours into games like Dizzy and Double dragon.

When I got to school I realised that contrary to popular belief I had a talent in art. I was never the best student and that reflected in my grades. I hated school and art was a way to forget about school and do something I was good at and enjoyed. After secondary school I went to college and studied art and design. I didn't really enjoy it as the college never really tried to develop our skills and the only thing I got out of it was gaining a basic knowledge in Photoshop.

Since then I've always tinkered but now its time to get serious! I love games and I love art so why not get together with a bunch of lazy-eyed freak shows and make games.

Sounds like a plan uh? Well, this is the story charting my rise and inevitable fall as Caper Republic Artist and world champion cat breath sniffer.